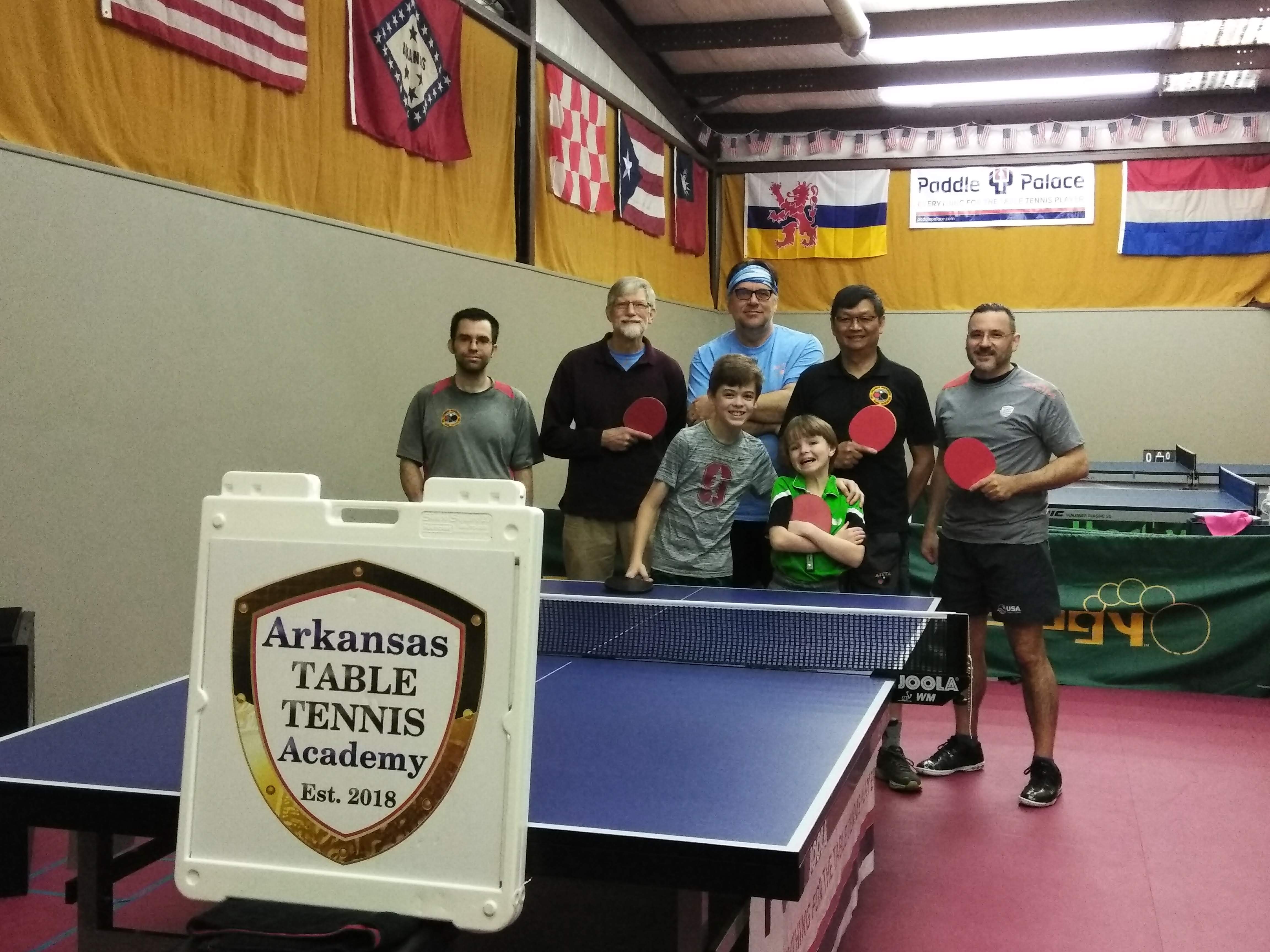 Welcome to the tournament report for the ARKTTA 2020 March 7-8 Youth Weekend, a USATT 2-Star Sanctioned Tournament, at the Arkansas Table Tennis Academy.

Reflections on our March 7-8 tournament and current events:

As I write this tournament report at the end of March while relegated to my home in the midst of the COVID-19 pandemic, I'm reminded of how special these tournaments can be.  When we are able to gather together as a group in a competitive and friendly environment to share the sport of table tennis that we all love, it really is one of life's blessings.  Shortly after this tournament, life as we have known it changed course.  With so many people affected by this pandemic and requirements to avoid group activities, going forward has not been easy.

At the moment, we have no idea when our next group training will be, let alone when we'll be able to hold another tournament.  Too many people around the world are dying during this pandemic and tens of thousands more are sick.  But we are hopeful because many more are on the front lines fighting for our health.  Hopefully there will be relief on the horizon and we will someday be able to take comfort in each other's presence again. In the meantime, we can count our blessings, practice safe and healthy habits, and help each other when possible.  Working together toward a common goal to defeat COVID-19 gives us the best chance to overcome all of the challenges that the pandemic presents.  Until next time, I wish all of you love, health, and happiness.  Please take precautions, stay healthy, and be active.

As a tribute to the human spirit and the many bonds we share, I offer you this tournament report...may it bring a smile to your day. :)

Thank you to our local sponsors Edward Henkel, DVM & Mary Henkel, DVM of Stuttgart Animal Clinic in Stuttgart, Arkansas!  They helped us cover the USATT sanction fee.  Also, thank you to my parents, Mike & Cathy Lauro of Tampa, Florida for donations to cover Subway sandwiches for all competitors on both days.  These valuable sponsorships help us provide an exceptional experience for tournament participants. 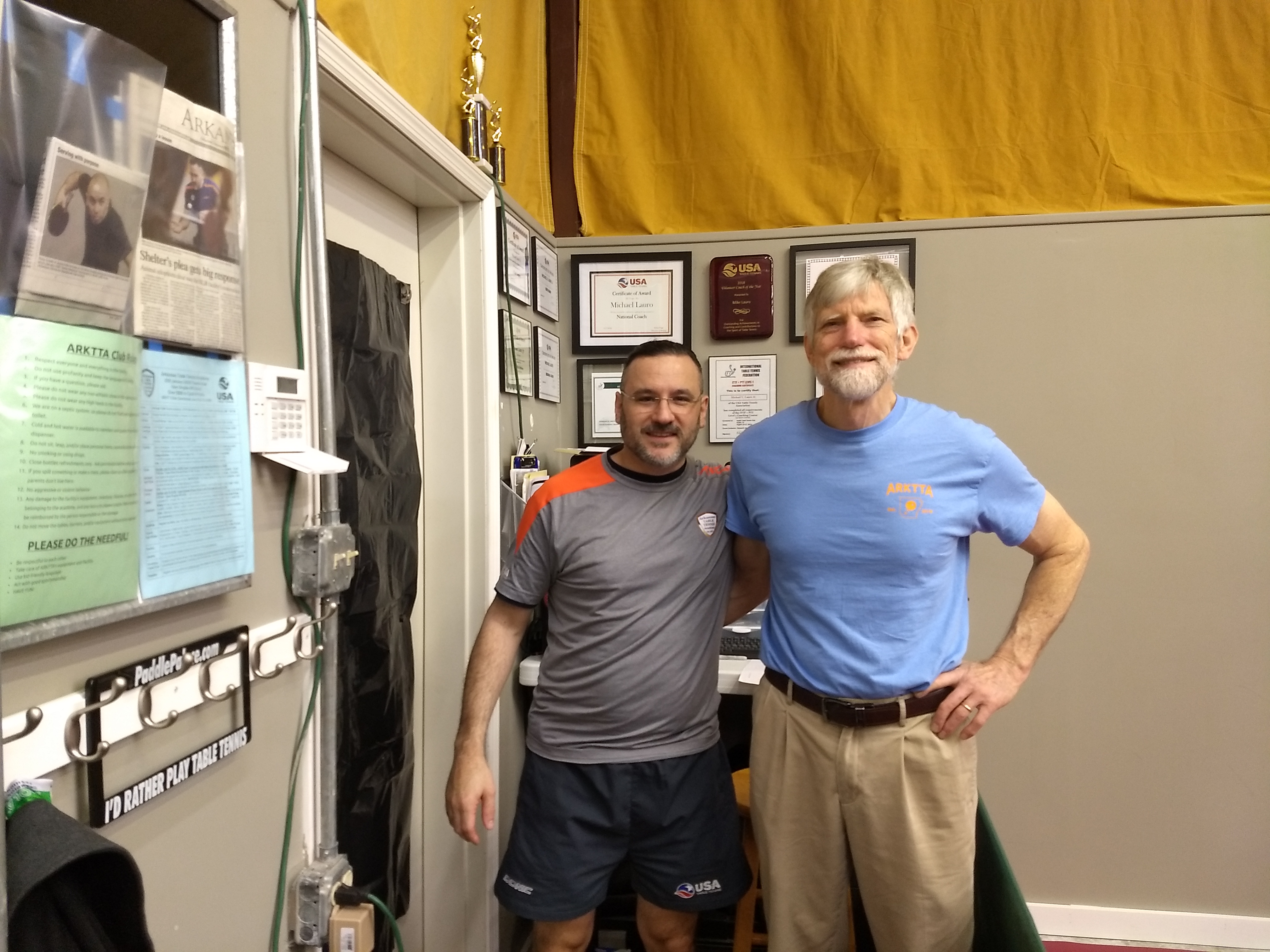 All of the tournament results are listed on the Omnipong.com website here:  ARKTTA 2020 March Youth Weekend.

For our second USATT-sanctioned tournament of the year, our focus turned to providing a competitive environment for our more junior players who are practicing at the academy.  We also wanted to offer another set of sanctioned events for juniors and adults outside of the local area.  While our hope was that we'd have at least 8 junior players attend the tournament, scheduling conflicts resulted in only 3 junior players able to participate.  Even with a smaller group, the juniors' competitive spirit filled the venue as they competed in singles, doubles, and three skill challenges on Saturday.

After the junior events, a group of 6 players (1 junior and 5 adults) competed in the Under 2300 Singles.  The day finished with a 3-player round robin of Hardbat Singles.

Sunday events comprised an Open Singles event followed by the Under 3400 Doubles.

The junior events kicked off with a 3-player round robin consisting of Seth Chapman (age 14, Morrilton, AR), Ishan Pagnis (age 11, Conway, AR), and Alex Piech (age 10, Rogers, AR).  With Alex Piech have the most experience in the group, he was able to decisively claim 3-0 victories over Seth and Ishan.  In the match between Seth and Ishan, the first game was close but Seth pulled ahead in the match with an 11-8 win.  In games 2 and 3, Ishan continued to stay focused on the match and determined to win each point.  However, Seth was able to use his height and wingspan advantage to win both games and clinch 2nd place.  These matches were very rewarding to watch as three junior players from Arkansas competed against each other and displayed exceptional qualities of serious concentration, emotional regulation, and good sportsmanship.  At the end of the event everyone was smiliing! 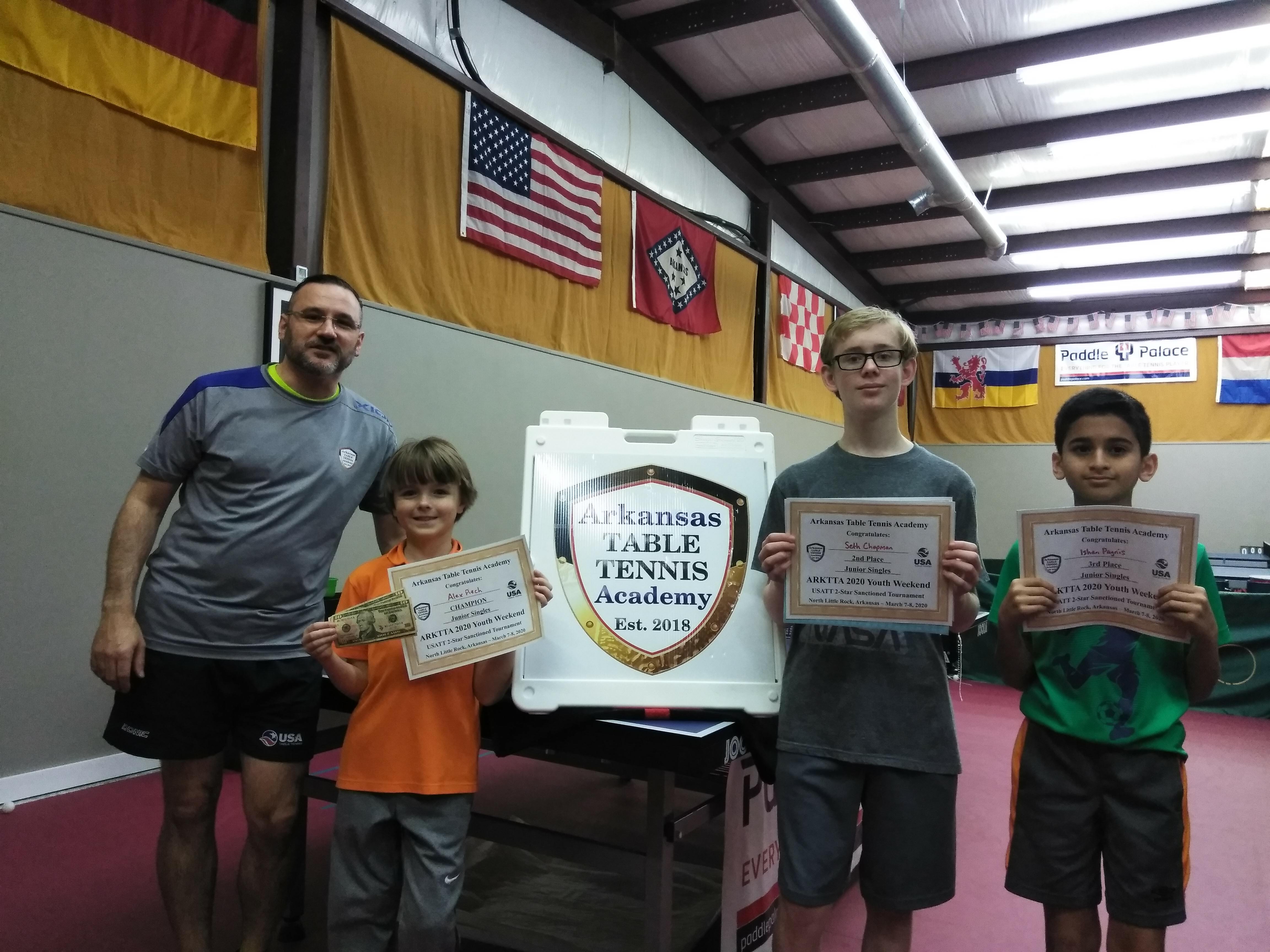 Because we didn't have an even number of juniors for doubles, I rotated as partner for each of the them in a giant round robin.  With me and Alex being left-handed and Seth and Ishan being right-handed, each junior player go excellent doubles experience playing with an adult, another junior, and having a partner who played with the opposite hand.  We played 3 rounds, and each of us ended up with 2 wins and 1 loss.  We all enjoyed the variety and teamwork in this event! 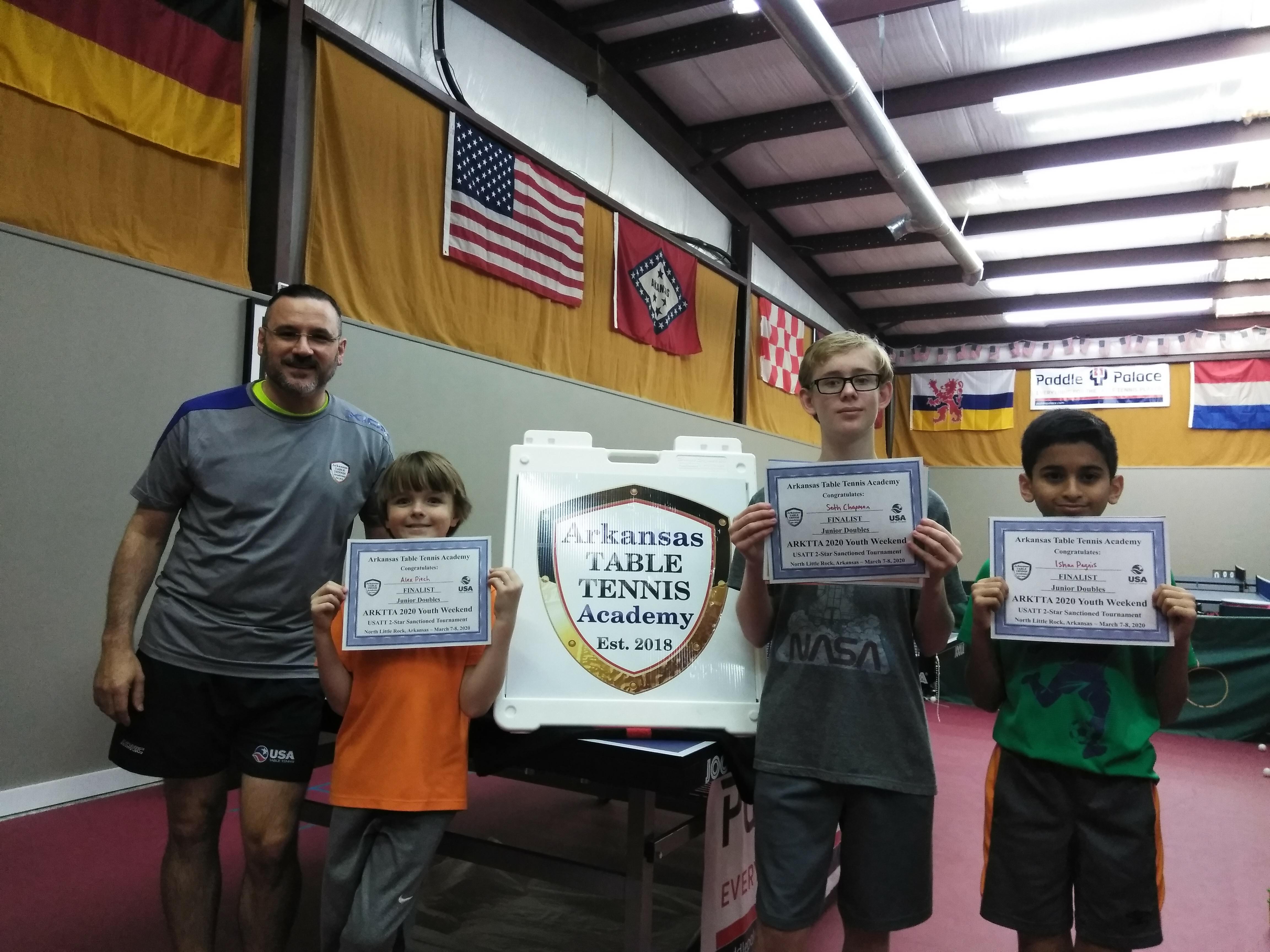 This tournament showcased the first skills challenge in a competitive environment at the Arkansas Table Tennis Academy.  Alex, Seth, and Ishan competed for top positions in three (3) categories:  Serving, Accuracy, and Consistency.

The Serving challenge consisted of 3 rounds with each player getting 10 serves per round.  In each round, 1 point was scored for a ball that landed deep on the table near the end line (the rest of the table was covered with a towel).  A target was placed on each corner and the middle.  Hitting a target was worth 3 points.  Alex Piech turned in a solid performance in all three rounds to win first place by a comfortable margin.  Seth and Ishan were tied after 3 rounds and entered a playoff with both players getting 10 serves.  Seth went first and scored 3 points.  After Ishan's missed his first 7 serves, the pressure was on to force another playoff.  With only 3 serves left, Ishan gained his composure and hit each one on the table to force a second playoff.  Seth again went first and this time scored 6 points with the help of hitting one of the targets for 3 points.  Ishan knew the score to beat and was off to 3 points in twice as many serves leaving only 4 serves left to tie and force another playoff or seize 2nd place.  Ishan, feeling the pressure, attempted to go for the win and took aim at the targets with his last 3 serves.  Although they were close, it wasn't mean to be for Ishan to overcome Seth's lead.  Seth claimed second place and Ishan third place after 2 playoffs! 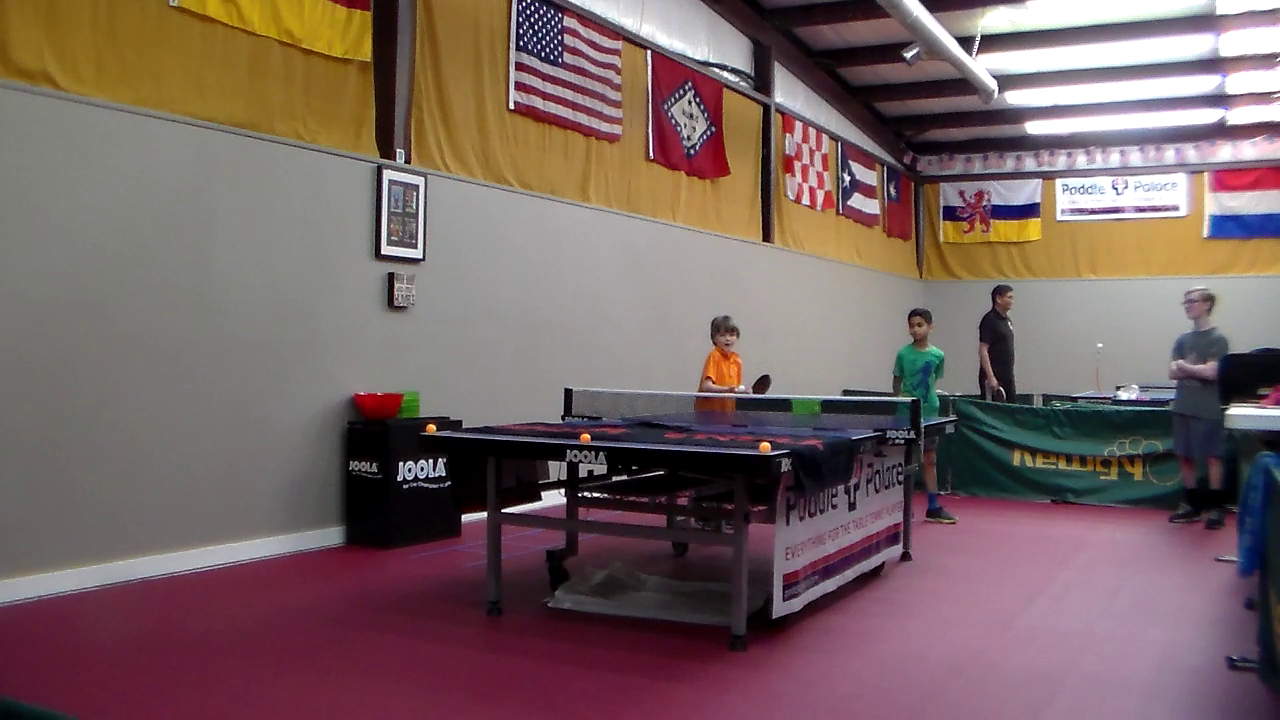 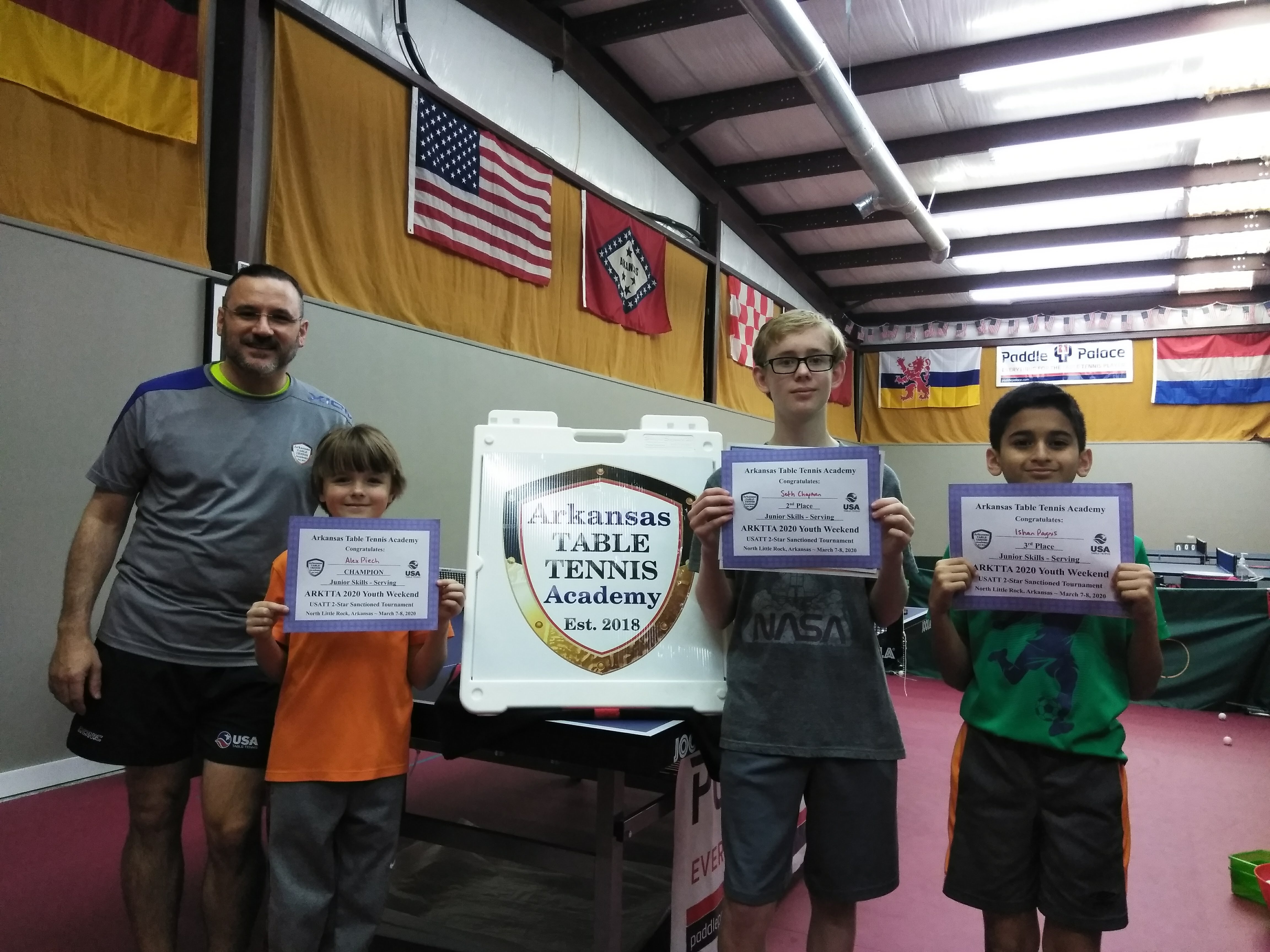 The Accuracy challenge consisted of 4 rounds with each player getting 20 balls per round to ring targets placed in various locations on the table.  Each target was worth 1 point.  In the first round, players had to use backhand push against backspin.  The second round required using forehand topspin strokes against backspin.  The third round required forehand topspin against topspin.  In the fourth and final round, the ring targets were replaced with a towel and players had to use a combination of strokes to hit near the end line of the table.  After 4 rounds, Alex and Ishan were tied for first with a playoff needed to decide who would be the champion.  In the playoff, Alex outscored Ishan by only 2 points to secure a first place victory.  Ishan finished second and Seth third. 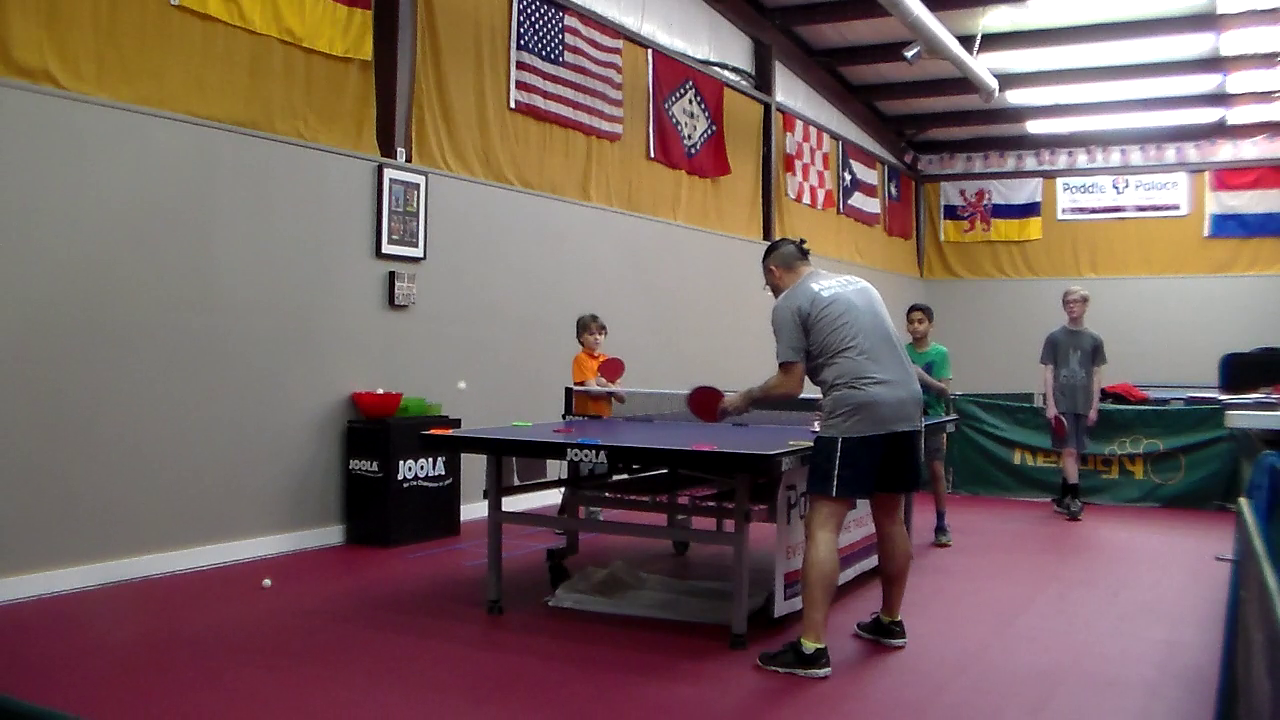 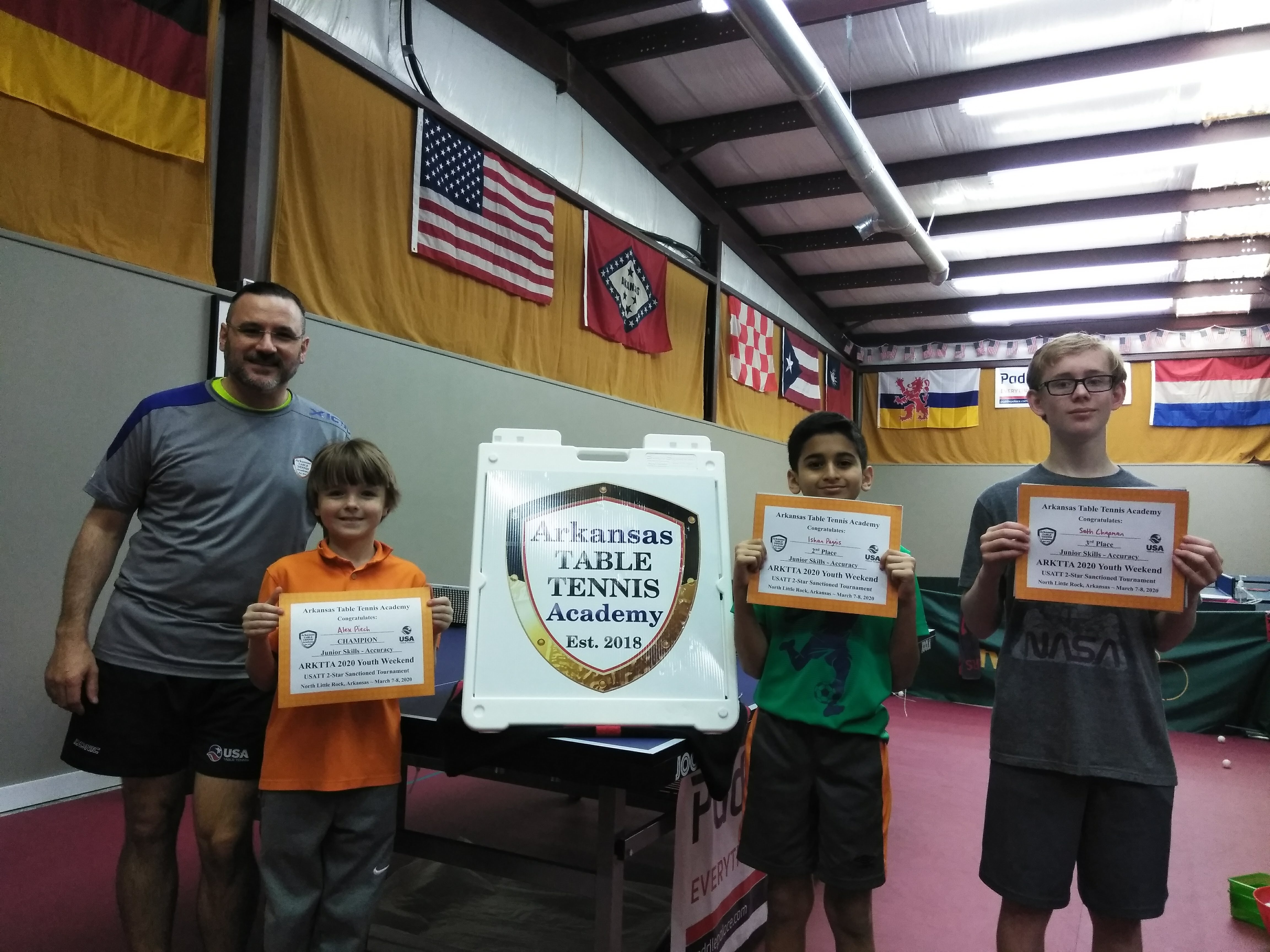 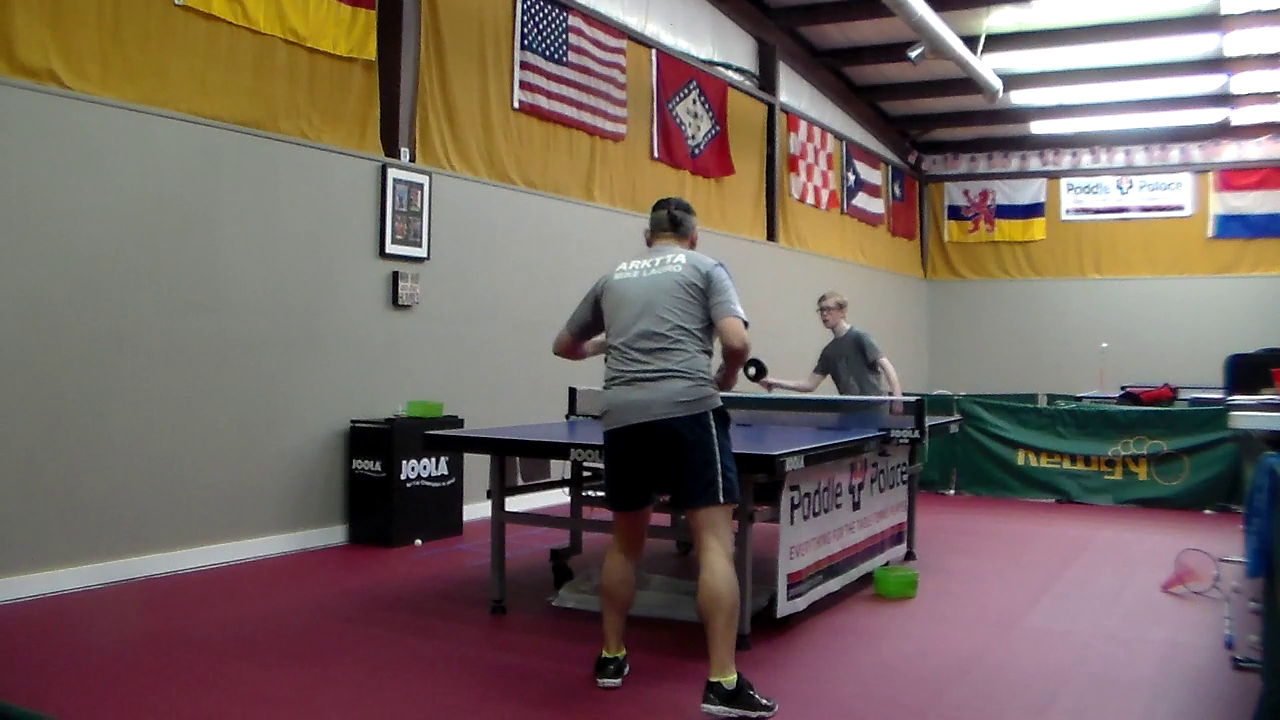 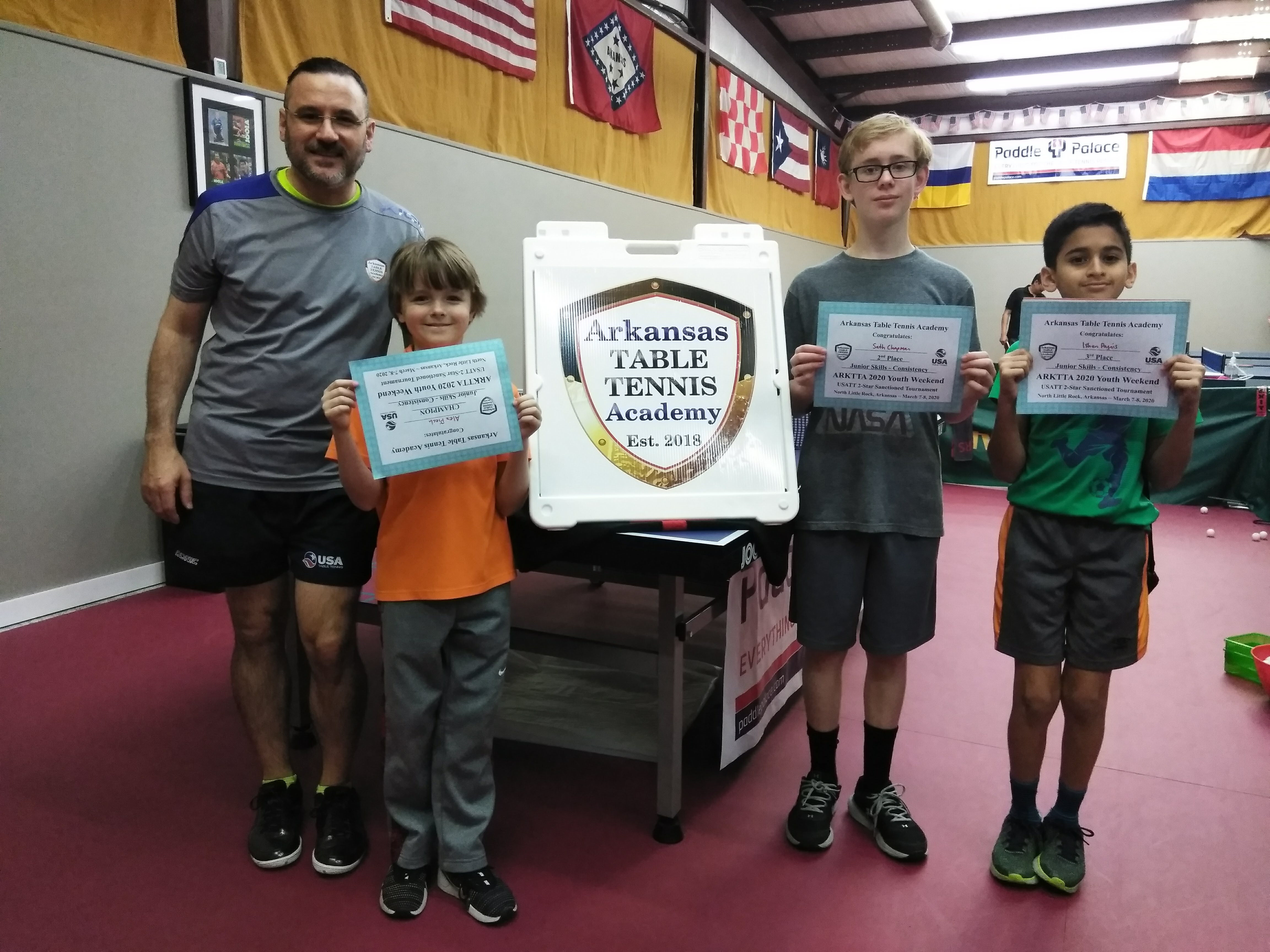 After the junior events concluded, we took a break for lunch and then jumped into the Under 2300 Singles giant round robin followed by the Hardbat Singles.

In the Under 2300 Singles, 6 players competed in an event that totaled 15 matches.  All but 2 of the matches were won 3-0.  The only 4-game match was between Kitt Oudthone and Cade Chapman (Seth's older brother).  Kitt took the first 2 games at 10 and 7, but Cade rallied in the 3rd 11-9 to stay alive.  In the 4th game, Kitt maintained control with an 11-4 win.  In the only 5-game match, Olaf Hoerschelmann outlasted fellow practice partner David Willard 11-8 in the 5th.  Mike, Alex and Olaf finished 1st, 2nd and 3rd respectively.

Results - Under 2300 Singles (Giant Round Robin) 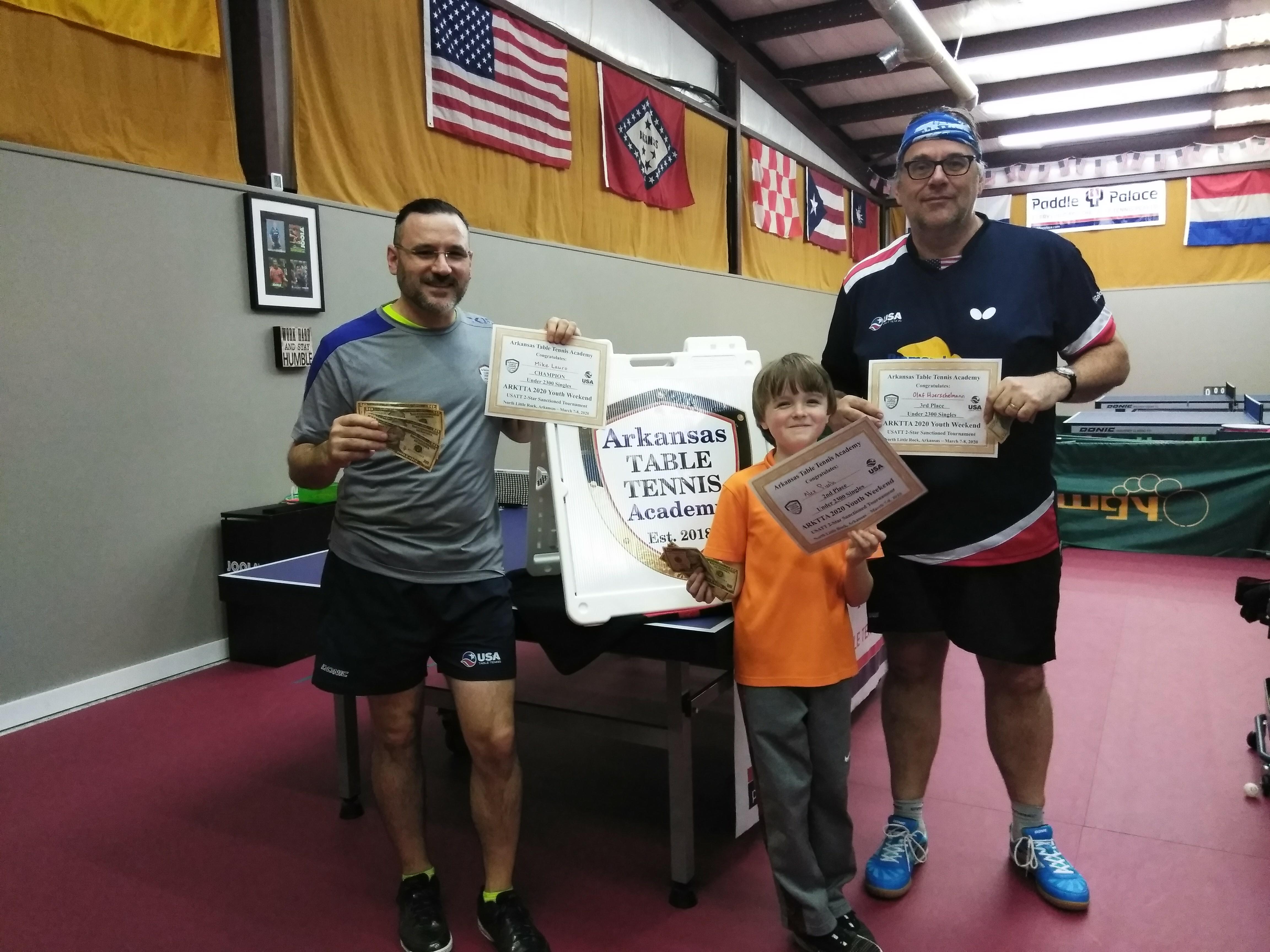 It can be challenging to find players who want to play hardbat around here, but Olaf, David and I love to play this event and we really enjoy change of pace (pun intended!).  Switching from playing the more popular inverted, short pips, and long pips to a hardbat paddle can provide quite the challenge for any player who doesn't typically use a hardbat.  Without the attention to spin required for non-hardbat paddles, we shifted our focus to more control with an emphasis on timing and placement.  Our match format consisted of the best 2 out of 3 games with each game going to 21 points.  As a result of this tournament, I've assembled more hardbat paddles for use at the academy and hopefully we'll have enough players in the future for hardbat doubles. 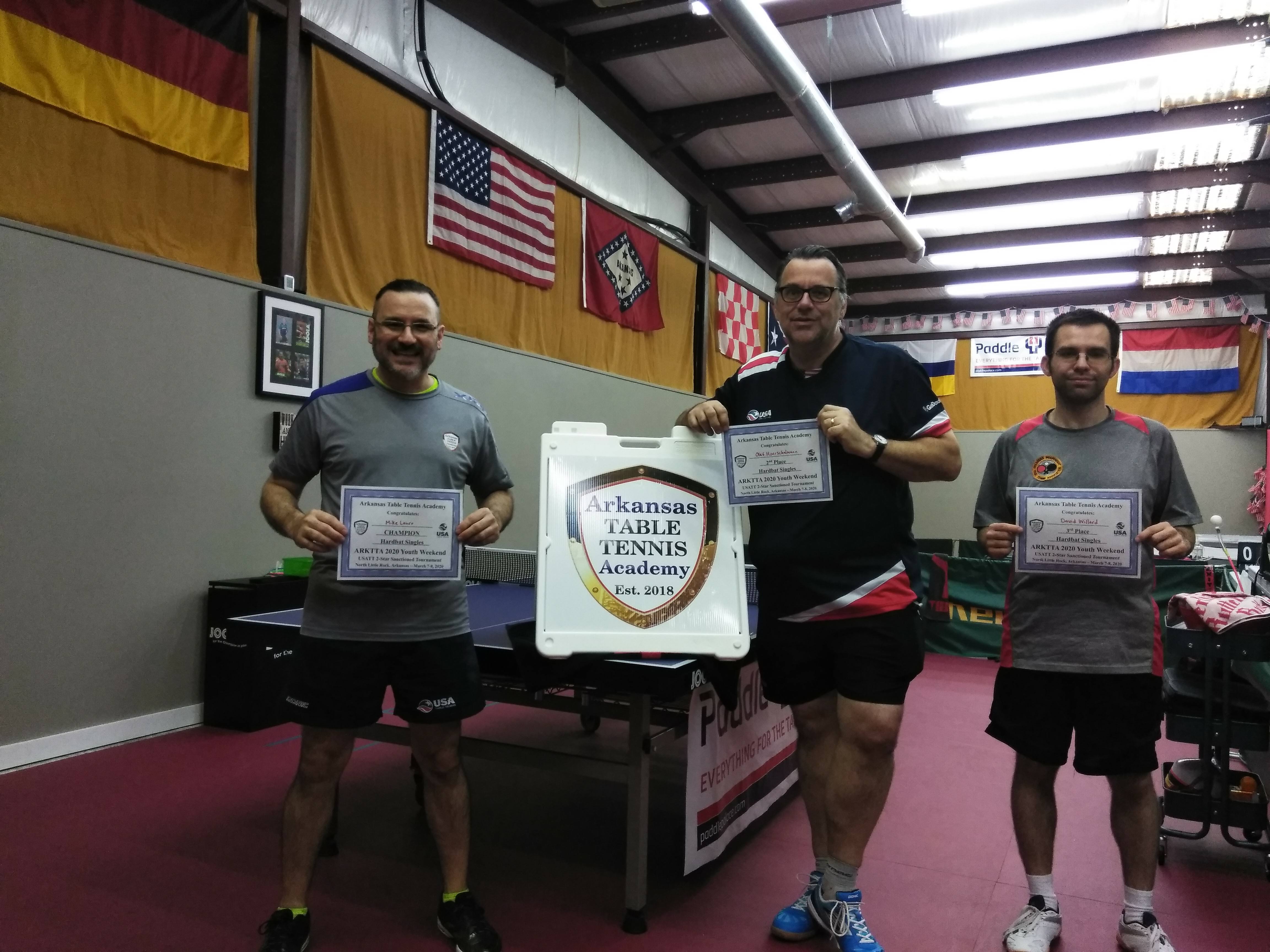 On Sunday, we had just 2 events:  Open Singles and Under 3400 Doubles.

For this event, we welcomed one of our sponsors Edward Henkel, a doctor of veterinarian medicine who runs the Stuttgart Animal Clinic with his wife Mary Henkel.  Edward drove about an hour and half to join us for Open Singles.  Also, Jason Piech (Alex's brother) was able to join us as well.  He couldn't play on Saturday because he was competing in a mathematics competition in Little Rock.  He ended up securing one of the top positions and qualified for nationals in the math competition.  Congratulations Jason!

With 7 players in a giant round robin, we had 7 rounds and 21 matches total.  With 18 of the matches going 3-0, only 2 went to 4 games and 1 went to a 5th game.  Brothers Jason and Alex battled it out in the first 4-game match with Alex holding on for a 12-10 win in the 4th.  In the other 4-game match, Kitt Oudthone won over David Willard 11-7 in the 4th.  In the only match to go the distance, Jason Piech and Kitt Oudthone turned in an epic and memorable match.  Check out these scores!  Kitt claimed the first 2 games 11-9, 11-9.  Being on the verge of victory in deuce in the 3rd game, Kitt could not confirm the win and Jason stayed alive with a 12-10 victory.  In the 4th game, Kitt again had an opportunity to end the match but Jason again kept his chances alive by taking the game 11-9.  The suspense and excitement continued deep into the 5th game, but Jason was able to pull away with an 11-8 win that ended Kitt's upset attempt.  Everyone enjoyed the thrills the Jason and Kitt provided for us! 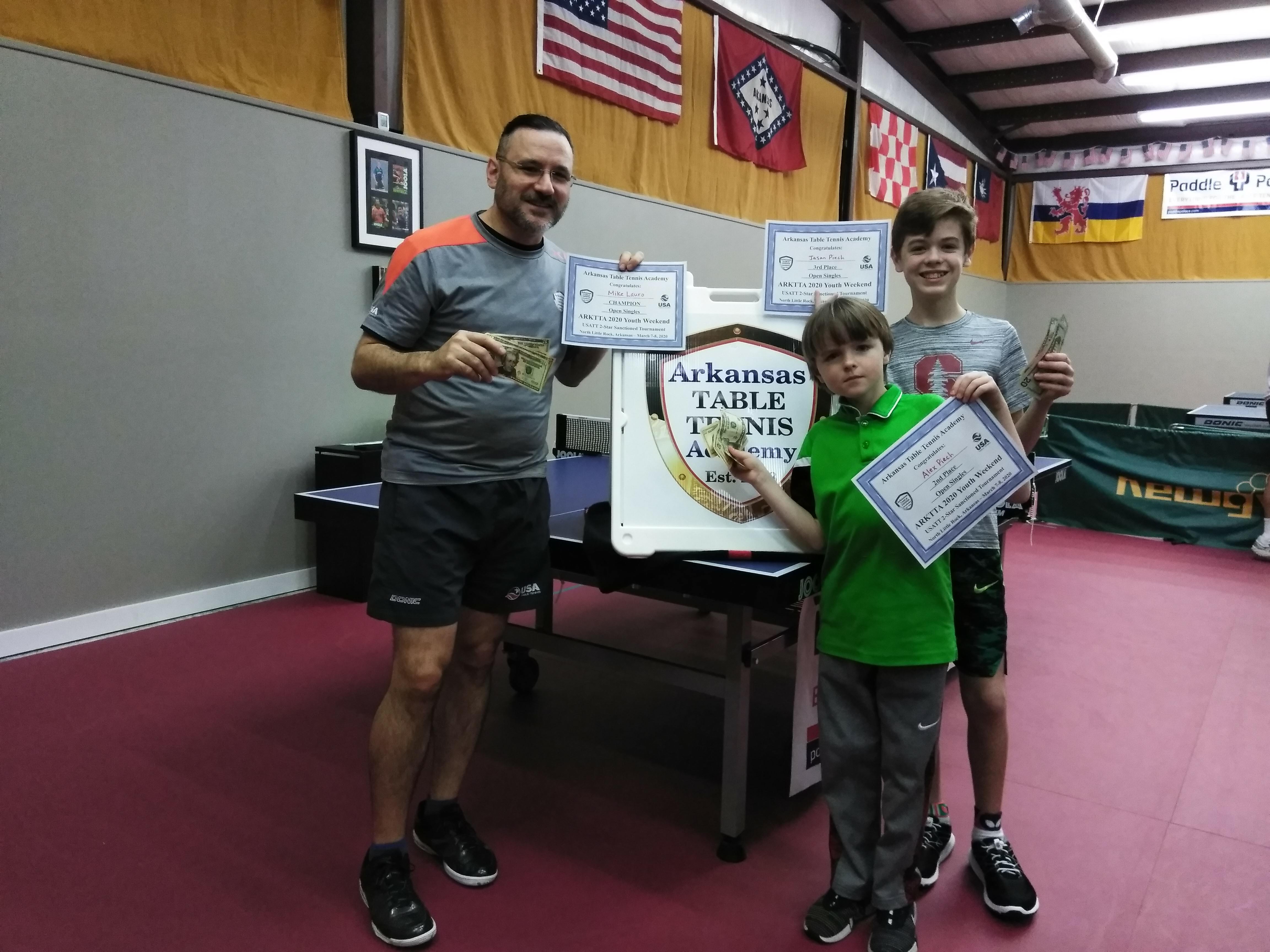 The Under 3400 saw 3 teams compete in a round robin.  Mike and David practice together a lot at the academy and are familiar doubles partners.  Kitt welcomed Arkansas table tennis veteran and legend Paul Hadfield as his partner.  The lefty-right combo of the Piech Brothers were the only all-junior team...although most of us adults are kids at heart!  It was a special treat for all of us to be able to play with Paul Hadfield and we hope to see him again in future tournaments. 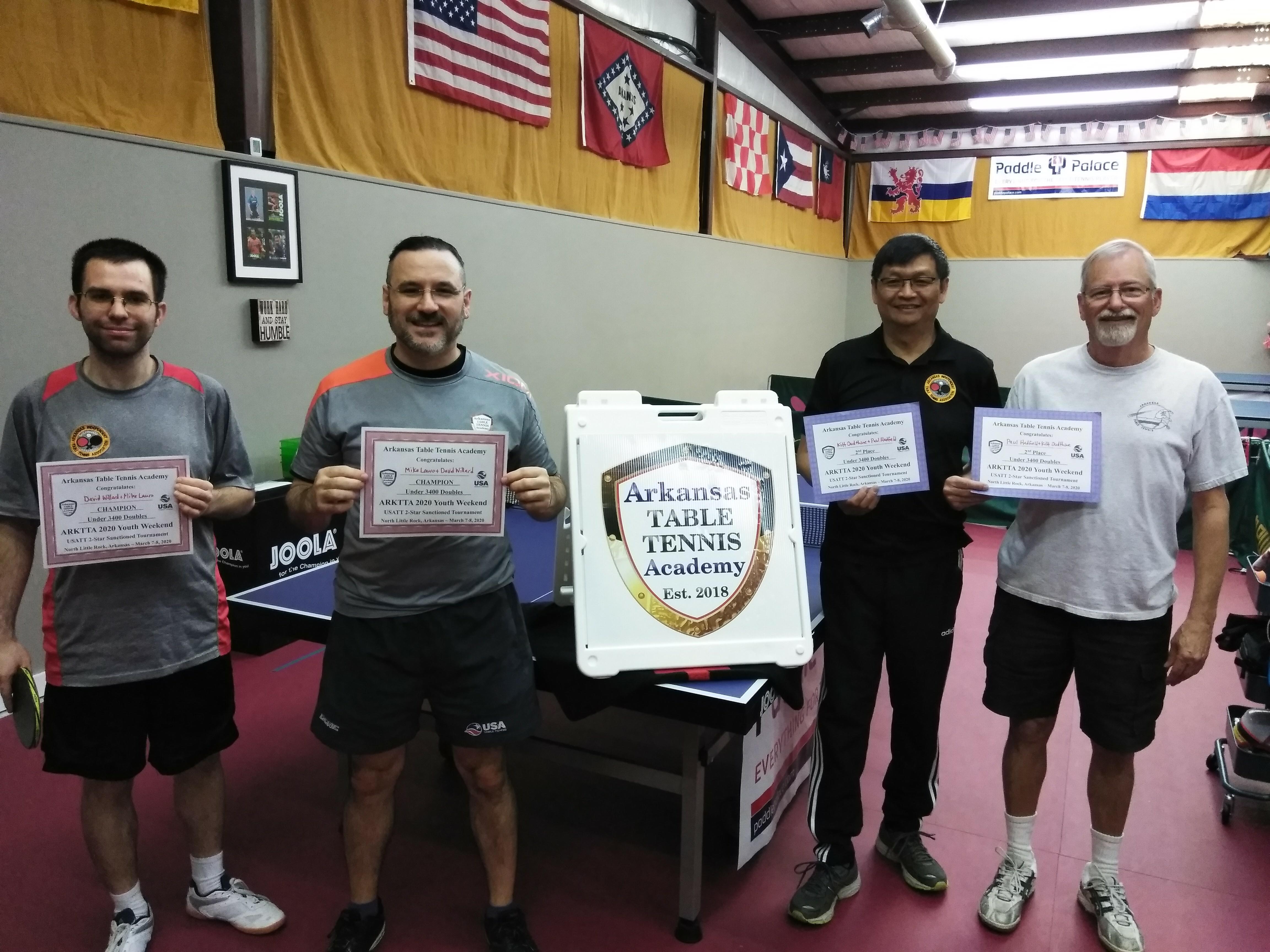 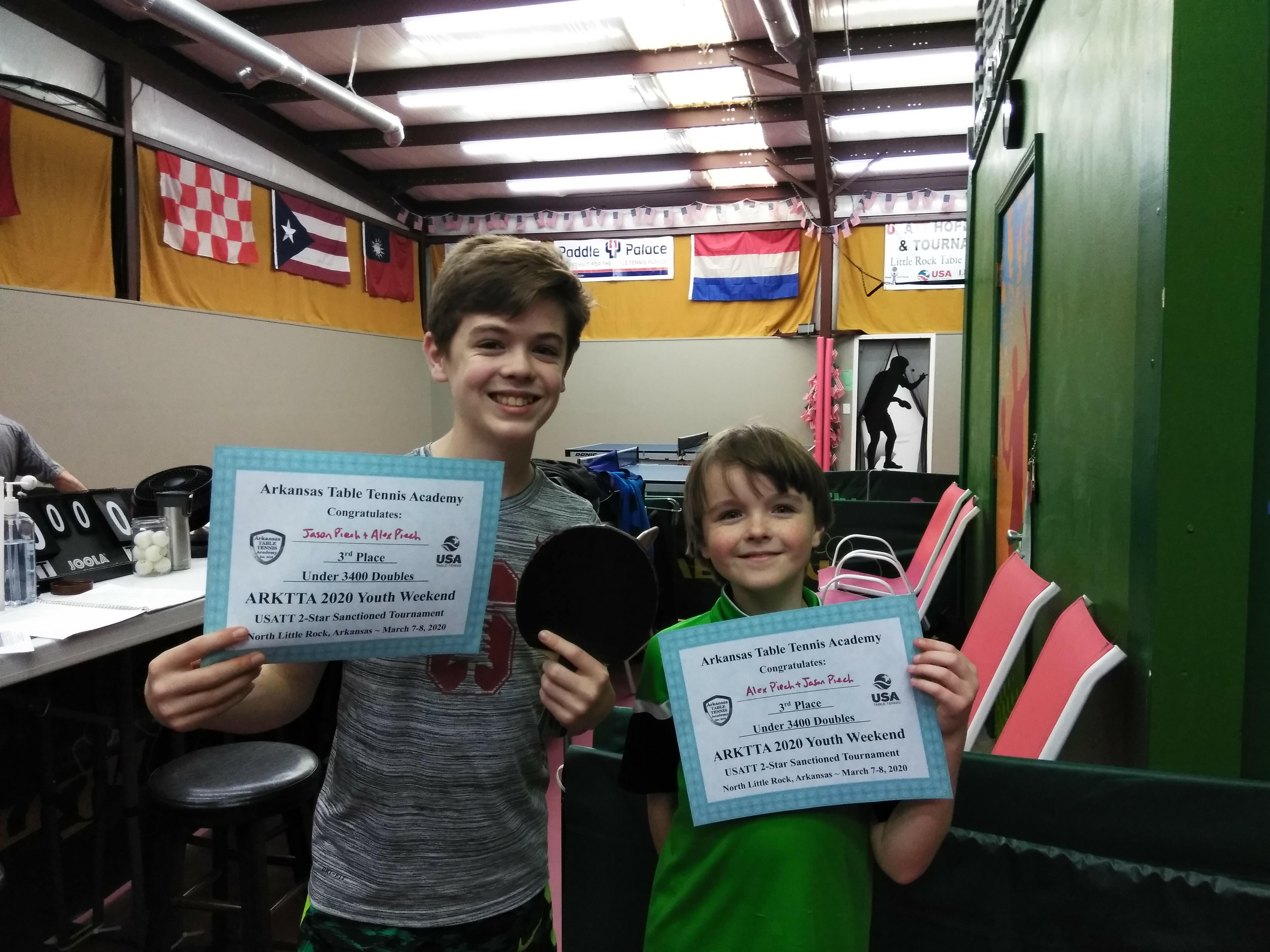 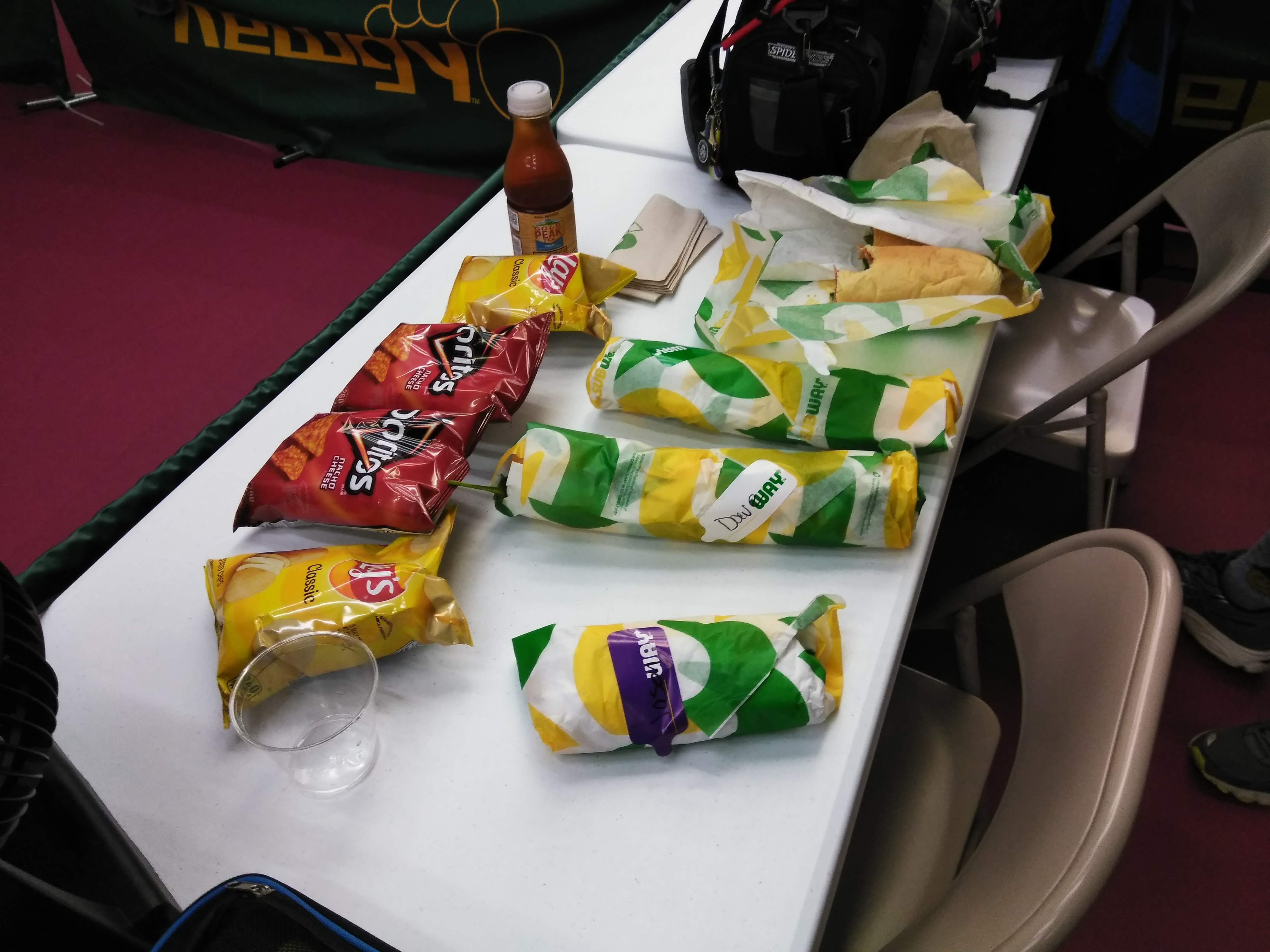 Above Photo - Donations from our sponsors covered Subway lunches for everyone. 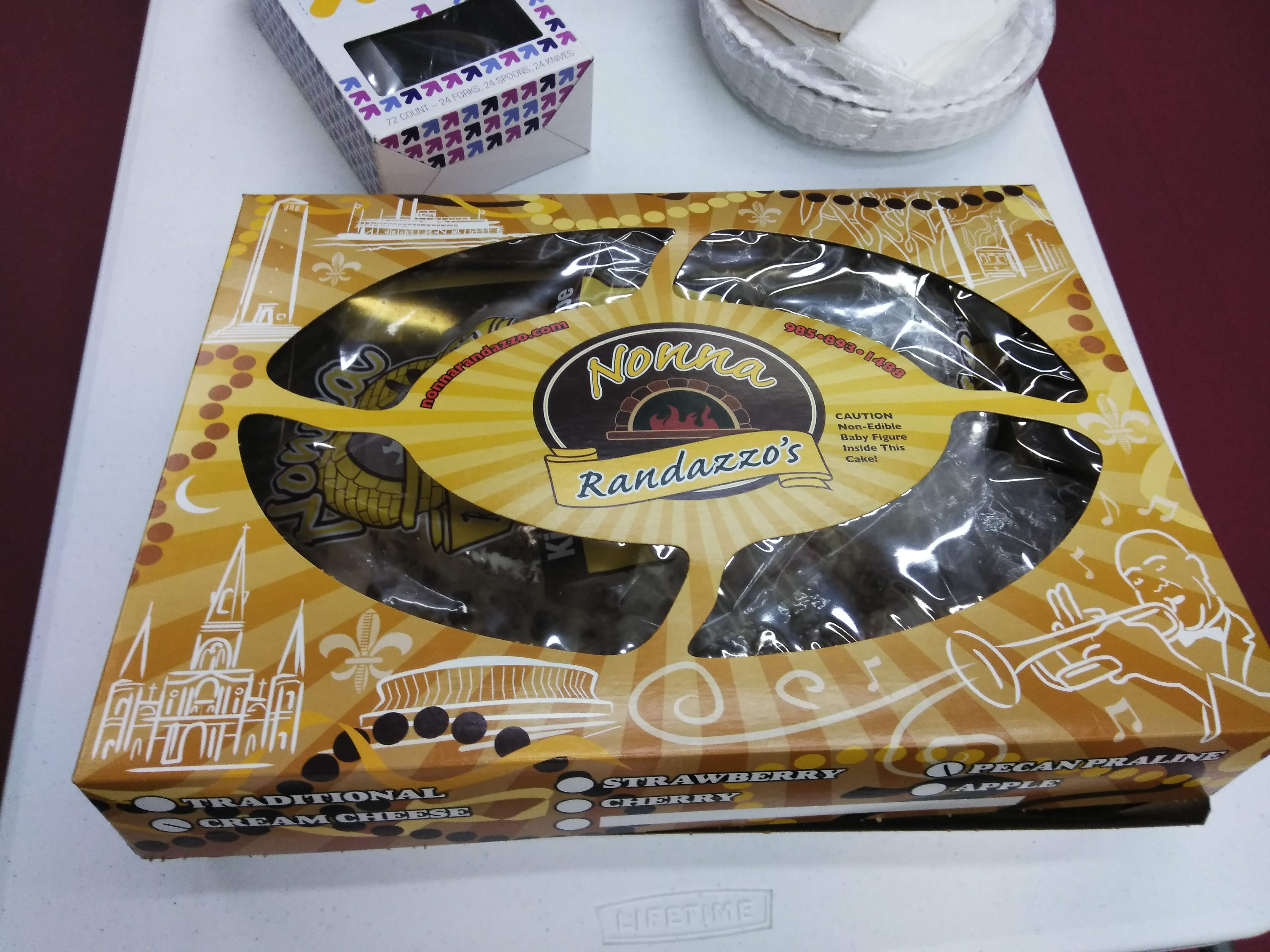 Above Photo - I brought back from New Orleans a traditional King Cake for everyone to share...Pecan Praline and Cream Cheese flavored!

Suspended due to COVID-19 concerns